back to basics: skincare must-haves 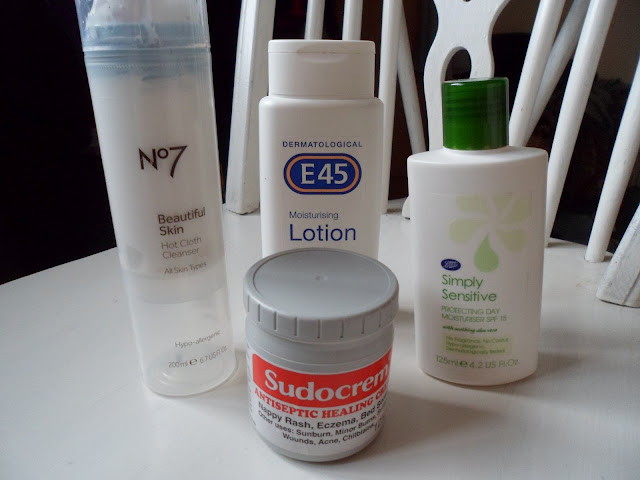 Normally one of the few things I feel really good about is my skin. I very rarely get spots and my skin is usually very normal and is generally very well behaved. I occasionally get some drier patches in certain areas such as around my nose and my eyebrows but they're nothing a little exfoliator and a good moisturiser can't fix. However over the last week or so my skin has gone crazy! I'm beginning to think that perhaps I've had a reaction to something as I also have a few spots on my neck which is unheard of for me. Due to this, I've really tried to keep my skincare as simple as possible and just use some really gentle products that I know and trust.

No7 Beautiful Skin Hot Cloth Cleanser - A while ago now, even before I started my blog, I tried the much loved Liz Earle Cleanse and Polish and had the worst allergic reaction imaginable - my skin looked like it was covered in boils. I used it for about a month in total, but this was definitely not a "purging" stage as some people have suggested to me as it was so itchy and uncomfortable and very much unlike normal spots. However, I did really like the whole concept of using a muslin cloth with my cleanser so even after stopping using the C&P I continued to use muslin cloths in my skincare routine. I love the gentle exfoliation of them and how bright and radiant they can make your skin appear. They just generally make your cleansers work a lot harder - simple but brilliant!

Last time Boots did their £5 off No7 vouchers I decided to try the No7 Hot Cloth Cleanser and I definitely prefer it (surely anything is better than a rash all over your face haha). I personally just find it to be so much gentler on the skin. As this is the most gentle cleanser I own it's something that I really trust to clean my skin without aggravating it even more with strong fragrances or exfoliating bits and bobs.

The No7 Beautiful Skin Hot Cloth Cleanser is £10 and available from Boots or online here.

Sudocrem Antiseptic Healing Cream - Whoever created Sudocrem is my hero at the moment! For me this is the best thing to speedily get rid of spots. I just dab some on any spots before bed and it just dries them up and shrinks them nicely without making them all horrible and flaky. I've tried quite a few spot removing gels and this does the job better than all of them. It's also such a good cream to have lying around as it can also be used on other things such as sunburn, sores and... um... nappy rash.

It's so effective as the main ingredient is Zinc Oxide which has antibacterial properties and can help create a barrier between your skin and the air. If you haven't tried this for treating spots then I really do suggest giving it a go as unlike some more acidic treatments it won't aggravate them and make the area any sorer or redder.

Sudocrem is available everywhere (pharmacies, supermarkets etc) but is £2.69 for a 125g pot from Boots or online here. This will last you forever as you only need such a tiny amount because it's so thick. I've had mine for about a year and I still have about 80% left!

Boots Simply Sensitive Protecting Day Moisturiser - This is the day moisturiser I use for when my skin is playing up. As the name suggests it's so gentle and not too thick so makes a great base for make up. It also contains SPF15 so is fab for protecting your skin too, as well as aloe vera to sooth it. As it's fragrance and colour free, it won't irritate your skin any more. I can't really say enough good things about this moisturiser! It's basic but just what my skin needs when it's unhappy! It's so cheap too.

Boots Simply Sensitive Protecting Day Moisturiser is £2.79 from Boots or online here and is currently on a 3 for 2 offer.

E45 Moisturising Lotion - Night time is when your skin does most of it's healing so I like to use a really good moisturiser at night to help it rehydrate and repair. At the moment I'm going as simple as it gets with moisturiser and using the E45 Moisturising Lotion in place of my usual night cream. Again, it's perfume free and hypoallergenic so is very gentle on the skin. Also, although it's very moisturising it doesn't leave your skin feeling greasy at all. The only reason that I don't use it in the day is that it takes a little longer than the Boots moisturiser to entirely sink in so it isn't so good for under make up.

E45 Moisturising Lotion is £5.99 from Superdrug or online here. This price is for 500ml though whereas my bottle is 250ml so the smaller bottle is probably cheaper!

I hope this helps any of you who are also suffering with your skin at the moment. After all, it is exam period which often means stress, chocolate and late nights = spots!

The only other advice I can give is drink as much water as possible and have as many make up free days as you can. There's no point clogging up your pores even more with layers of thick foundation as that will just cover the problem rather than treat it!

What's your back to basic skincare secret?